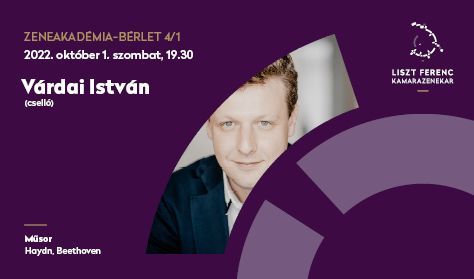 One of the most renowned chamber music ensembles is preparing a real feat with its world-class artistic director, cellist István Várdai: following two Haydn pieces, the second part of the concert will feature a large orchestra, conducted by Várdai, playing Beethoven’s monumental Eroica Symphony.

During the first part of the concert, the audience will be able to witness the collective thinking and the perfectly honed collaboration that has been established between the artistic director and the ensemble over the course of two and a half years, and to enjoy the true musical soaring coming from such a solid foundation.

On the International Day of Music, the Franz Liszt Chamber Orchestra will shine a light on what it considers to be the foundation of its artistic credo: the timeless beauty of classical music and the professional support of young artists.

As part of the ongoing Masterpiece project, on the season-opening concert open to holders of the seasonal ticket, the Franz Liszt Chamber Orchestra will once again share the stage with the students of the university, its mentored and talented young musicians.

Artistic director, soloist and conductor: István Várdai (cello)
Concert master: Péter Tfirst
With the participation of the students of the Franz Liszt Academy of Music

Season ticket Liszt Academy/4 Emmanuel Pahud has the virtue, typical of the greatest soloists, of not simply playing a piece, but telling stories through them. His brilliant technique and virtuosity, of course, is a prerequisite for this, but his stage charm and presence engaging all our senses is the result of this captivating musical storytelling role.

Season ticket, FLCO60/4 - Turning points – Dubrovay / Britten / Tchaikovsky It is a lovely moment when celebrants greet each other turning towards the next decades with an exchange of good wishes.

Season ticket, FLCO60/1 - Prayer of Atonement We stand bewildered seeing the great sins of humanity, confused by the evil…

Warning! The basket time limit is about to expire!